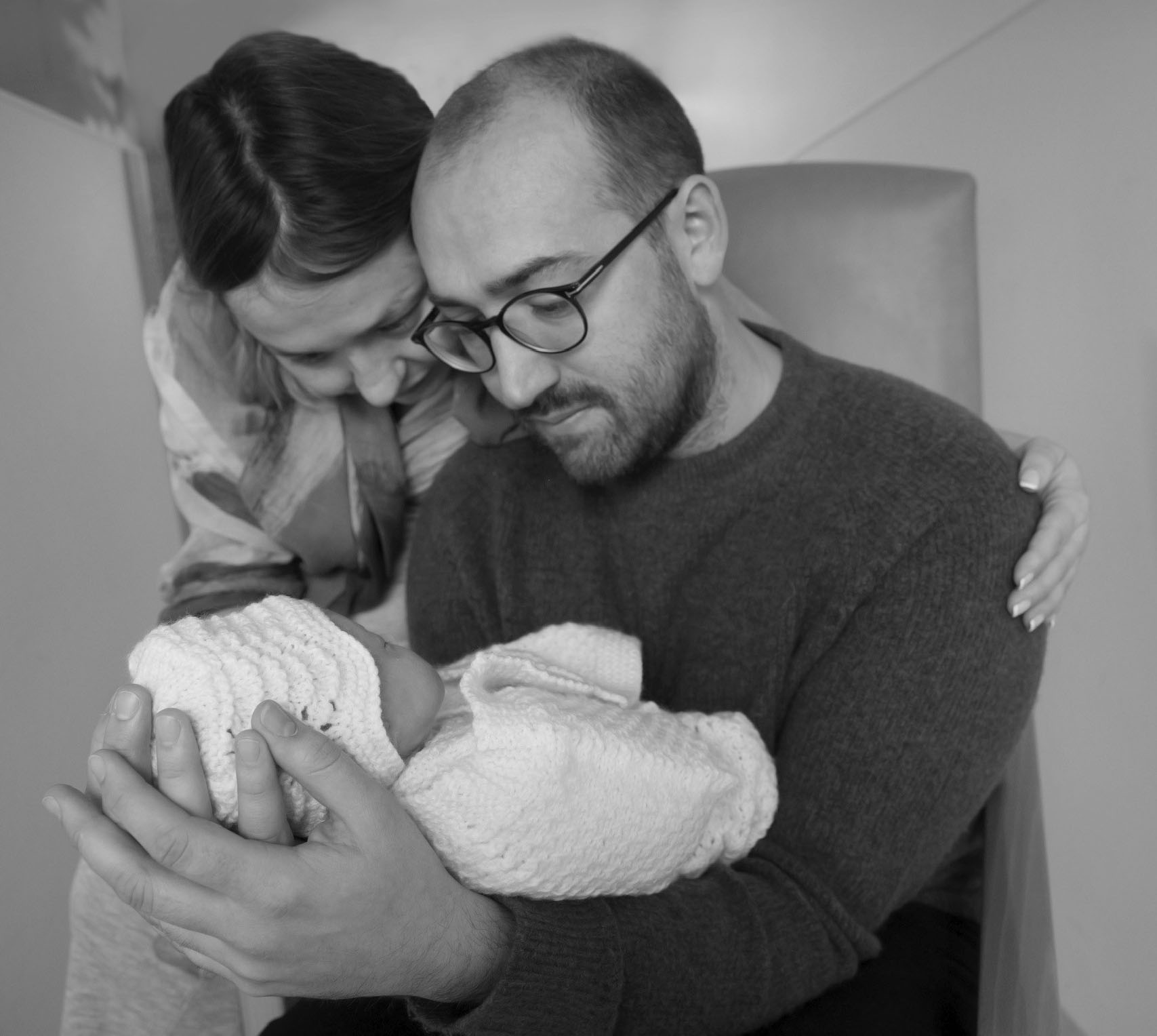 “Now when I think of Petals I see it as safety. In a time of my life that was really difficult, they wrapped around me and kept me safe. As I was going through the counselling it would have been hope.”

Liam is Head of Communications at a national charity, from Essex. On 24 November 2018 his daughter Paloma was stillborn at 41 weeks + 2 days old. Liam, and his wife Daria, both received counselling from Petals and are vocal about their experience on Twitter (You can follow Liam @lbpreston).

Can you tell us your and Paloma’s story?

My wife Daria and I, we had a perfect pregnancy. Everything was fine and we were set for a home birth. We had the pool set up in our front room as we approached the due date. We went over the due date by a few days but were told everything was ok. We were excited. We were on the couch the night before talking with our other daughters and I can remember feeling Paloma kicking, and going to bed that night and feeling that tomorrow was going to be the day.

We got up in the morning and were excited. I remember Daria ran a bath and could feel contractions and then we rang the midwife. The midwife came over and went into the bedroom with Daria. Lillie our daughter was baking in the kitchen. I just remember stopping because it was silent. The midwife had the machine to listen to the baby’s heartbeat, and when you’ve been to enough scans you get to know the whooshing sound you should be hearing. I asked Lillie to stop for a second and went into the room and I remember the midwife looking at Daria and I and saying ‘I don’t want to alarm you but I think you need to go to hospital because I can’t hear a heartbeat’.

In that moment I just shuddered. I remember thinking ‘well ok that’s wrong but sure we will go’. All three of us grabbed our stuff, shooting out of the door to the car and driving as fast as we could to the hospital. The midwife had phoned ahead. There was lots of panic. Daria was crying, I reassured that it was fine.

We got to the hospital and was ushered into a room. A doctor came in with the scanner, and I remember them turning to us and saying; ‘I’m really sorry’. It’s in those three words where you shatter. This must be wrong. I couldn’t understand, no one tells you that you could lose a baby – it’s not mentioned in your NCT class. We were just crying, and they had to bring another doctor in to verify and the hope builds. They just couldn’t hear a heartbeat. In that moment Paloma had gone.

The contractions were still coming. We stayed at the hospital. Daria gave birth to Paloma at 9.32pm that evening. You don’t know what’s going to come. The midwife came to us and said do you know what you’re having, in my head I was like ‘I’m having a dead baby – does she not know’. Paloma was born, and the midwife made it so much like she was still living, and like this is still your baby. I am so thankful for how the midwifes helped us in that moment. They got us to hold her, stroke her hair, hold her hand. That’s how we had and lost Paloma that night.

We were very lucky that they had a bereavement suite, but they’d had two other stillbirths that day, so we had to stay in the operating suite overnight. We had another day in a nice bed altogether. We have nice memories and photos all together. You don’t expect to lose a baby, it hit us. I think I’m a strong person, but I don’t know how anyone gives birth to a child after knowing they’ve lost them. How my wife managed to do that I don’t know. It takes so much courage and strength, then to be handed a baby who has passed away – it’s really so sad.

We found out about Petals through a referral from our midwife. They told us there and then. In a world where there isn’t much information about losing a child you reach out for hope and strength. It has been an enormous help for us.

What has been your experience of counselling?

The counselling we received was as a couple and I think that’s really important. I know the stats are quite high for couples who break up after losing a child. We went to the Petals bereavement counselling together.

You do grieve differently as a mother / father, and what having counselling together enabled us to do was to talk through the differences. Daria also had counselling on her own. The couples counselling allowed us to understand the differences between what each other was feeling and why we felt that. It puts an enormous strain on you when you lose a child. Being able to talk through it with someone who understands and has experience of dealing with other couples helps you so much to mover through the grief. And hearing I’m not the only person who feels like this. It’s common, but to us its brand new.

I 100% believe Petals kept our relationship going. As a father you grieve in a very different way, and it’s hard for people to understand that grief moves in different cycles. It meant that when we left the sessions, we felt more at ease with each other and could refer back to things we’d worked through in the sessions.

Daria excitedly fell pregnant again and we had an extended period of counselling to help us through that time.

It’s scary going into counselling – the idea that I have to go and tell this story to a stranger. As a husband and a father, I’m spending all of my time counselling the people in my house – my wife and daughters. So, I think what am I going to learn that I don’t already know? It’s completely different. In a couple you will judge each other, but when you trust a counsellor and you know they’re independent you’re able to open up and show exactly how you feel.

And as a father?

When it comes to men it is different to outwardly show grief, and that is important to unlock. The sessions were helpful in enabling me to do that with my wife. If I’d have been offered sessions on my own, I probably wouldn’t have done it, but as a couple, with my wife – that was so important. It’s vital that guys let it out. We’re stigmatised into thinking we need to be strong but if we don’t deal with how we’re feeling we can’t support others.

After our loss I definitely felt isolated. It’s a very different experience as a father losing a child. From a very young age you’re taught to be strong and not show emotion. When you’re faced with loss and the people around you are devastated your natural instinct is to protect. That’s the instinct that kicked in when we lost Paloma, to support Daria and my other children. You have to process your grief much faster. In a house full of sadness and darkness I had to try and level out the emotion, to keep our heads above the water. You have to move through grief at a different pace. You don’t have to do that of course and I’m sure other fathers act differently. I felt like it was in our family’s best interest for me to move faster through grief. The sessions were very good at shining a light on my isolation.

What in your view should have been different in how you were treated following what happened to Paloma?

I can only talk about our experiences after losing Paloma and the support that was around us. I imagine it’s different for everybody. From our perspective it didn’t feel joined up. It wasn’t mentioned in NCT, and no one talks about it in your family or friendship group. So, the idea of losing a baby is a complete shock, so you don’t know where to turn after you’ve lost a child. We had a bereavement midwife who came to the house a few times afterwards but that is very much focused on the mother, in my opinion. There’s not a wraparound support.

We were lucky because our midwife told us about Petals, but we could have just as easily had a midwife who didn’t tell us, and then we wouldn’t have met our counsellor and wouldn’t have had that support that would have kept us together as a family. The information is there if you look, but when you’re going through this it is hard when the darkness is around you to go looking for light. I don’t think there’s enough support or investment in helping couples go through the challenges that follow baby loss. From a clinical perspective the hospital has done its job, and now its society’s job to support these parents. There needs to be more support. When you have a baby your friends and family want to be there, but in loss your family and friends are grieving too so they can find it hard to be in a support role.

Our future is very different from how I thought it would be the first time we had counselling. We suffered such loss and were in such a dark place. We’ve gone on to have another child – Betty – she lightens our life. You need to have that light in your life when you have such sadness as well. We’re incorporating Paloma into Betty’s life. You worry that you will replace one with another and our counselling made sure we knew that wouldn’t happen. But our future is exciting. It’s nice to be in a loving marriage with our children. The reality is there were times when I didn’t think this is where I would be two years later. I say it to everyone I meet. This wonderful charity kept our relationship going. Betty wouldn’t be here without our Petals counselling that helped my wife Daria, and I, unlock how different our grief was.

When I think about what the future looks like for Petals. It’s not a charity I’d heard about before, it’s not a huge mainstream massive charity – but what it has reminded me is that there are a lot of niche charities out there doing incredible work that change people’s lives and I will continue to do what I can to support Petals.

Now when I think of Petals I see it as safety. In a time of my life that was really difficult, they wrapped around me and kept me safe. As I was going through the counselling it would have been hope.