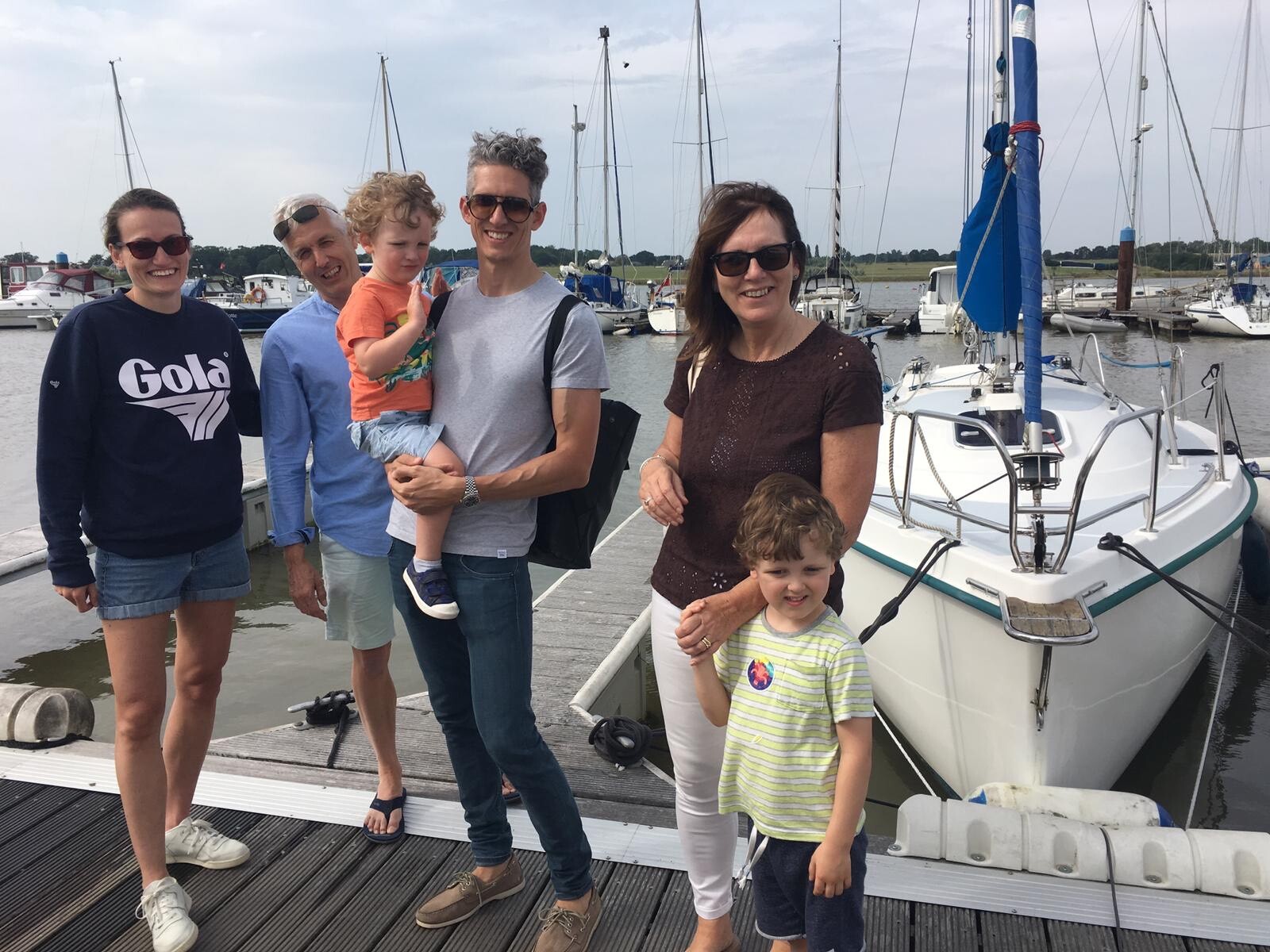 pictured with their children Amy and Scott and their grandsons

Can you start by telling us your story?

Losing Poppy is so against the order of things that it doesn’t seem fair or real. Friends and family ask how I am, and I say I am fine as it is not about me. Amy and George have lost their Poppy.

We have just had Poppy’s first birthday and I still wake at night and relive everything that happened on that Sunday night. Lockdown had just begun, and George called my husband to tell him that they were at the hospital and Poppy had no heartbeat. We went straight to hospital and my legs would not stop shaking, we were both silent driving there in a state of disbelief.

Amy came down to Reception after a while and my heart wanted to burst for her.  She was in total shock, my beautiful daughter who is always smiling just staring. That image will stay with me forever.

Amy came home for two days and on the Wednesday, she went back to hospital to give birth to Poppy.  In those few days we went to see them (always checking first if it was ok).  When I was away from Amy, I felt I wanted to be with her.

The day Amy went into hospital I was so anxious, how was she going to cope? How must she be feeling? I am saying Amy, but I felt as much for George too. The fact they are such a strong couple helped me. George called to say Poppy had been born and Amy had been marvellous. I could not stop crying and shaking, the relief Amy was ok, but the sadness Poppy would not be staying with us.

As a parent how did this make you feel?

As a parent you always want to be able to make everything right for your children. You feel completely helpless as you want to say “everything will be ok” I felt so much grief for Amy who I am so close to and it was a hurt that I cannot describe.  I was fearful of “saying the wrong thing”, but Amy kept reassuring me I would never do that.

Poppy was born at the beginning of lockdown and restrictions were in place, so everything felt so unreal. I couldn’t say “I know how you feel” because I don’t as I have not experienced losing a baby. I wanted to sit and cuddle Amy and protect her from all the sadness and we spoke lots on the phone during the day. I wanted to keep talking to her to make sure she was ok.

As a grandparent how did this make you feel?

I had prepared and helped plan everything with Amy for Poppy’s birth. I had washed clothes given to Amy from my son and daughter-in-law that my grandchildren had worn. I had friends who were having grandchildren around the same time and we had shopped together buying things for our new grandchildren and eagerly awaiting their arrival.

Suddenly our Poppy was not with us and all these other babies were being born. I was so happy for my friends but so sad that we didn’t have our Poppy. It was so difficult to buy cards and presents (particularly so many girls) but I did.

I see these babies regularly and friends send photos of their grandchildren. I want to see them, but it is so sad when I think my Poppy would have been looking or doing things at this stage.

It seemed ages until I could bring myself to go out as I did not want to bump into people who would ask me about my children or grandchildren. I did not want to explain what had happened as I felt sorry for people as well when I did have to say as they didn’t know how to react. When I did eventually go out with my husband we coped with this together. I yearned to be able to push a buggy again. We had lots of pieces of baby equipment in our house as I have three grandsons who moved to New York a few weeks before Poppy was born. I had seen my boys weekly from when the eldest was born and he was five when they went. I was a very hands on Nanny and I loved being with my boys.

I knew it was a chance of a lifetime for my son, daughter-in-law and boys but it was still heart-breaking when they went.  We planned to visit them several times last year but COVID came, and we were unable to see them.

We are a very close family and I felt so sad for my son as he could not come back to be with Amy. I felt empty with them going and was eagerly awaiting Poppy’s arrival and to be able to have time to be with Amy on her maternity leave.

Did your son/daughter have support from Petals?

Poppy was born on the 18th March at the beginning of lockdown. Everything changed so rapidly and the access that Amy and George would have had to help was not available. Amy found Petals online and contacted them.

What difference did the support make to you as a family?

I think it was a complete lifeline for Amy and George. We felt relieved and thankful that they were given Sue a professional counsellor. They both felt they could talk and share their emotions with Sue and still do. I will be forever grateful that Petals were there to help and support them.

Do you think you would have benefited from a group where other Grandparents can connect?

I think we would have benefitted as we were the only grandparents that had experienced this. Friends were so kind, but they were not in our position.

What do you think the benefits would be of having a support group for Grandparents?

Couples react differently in how they share their grief. Amy and George were very inclusive in sharing theirs with us. Everyone will feel different, but I think if you were having a bad day or thought you may be able to help someone else in the same situation it would be great to connect with other Grandparents. George’s Mum and I would send each other little messages and messages that other people had sent us. Just to know that other Grandparents could benefit from one thing that you say to help them would be wonderful.

I am now a supporter of Petals and read all the stories and information given by them and am in awe of the people who work at Petals. I feel blessed that there is a charity that can support bereaved parents in so many ways. During lockdown when it was so hard for many families. Petals have been offering online support.

What advice would you give to other Grandparents going through the same experience?

Let the couple take the lead. They will have days they feel they want to talk and see you and days that they want to be alone together. Don’t make them feel guilty by saying how much you were looking forward to being a Nanny and Grandad.

Share your feelings as a couple and talk lots.

Display your photos of your baby grandchild and talk often about them (providing this is what your son/daughter would like). You know your own children so you can judge days that are better than others. I asked my daughter every day to let me know how she was feeling on a scale of 1 to 10 and bless her she asked me.

Write your thoughts down.

Be involved if the couple want you to in any arrangements.  When we had Poppy’s funeral, I asked Amy if she wanted me to sort the flowers. Amy chose them (and although it was one of the hardest things I have done, ordering flowers for my Poppy’s funeral) I felt I was helping them. I ordered the same flowers as a bouquet for Amy that were delivered to her after the funeral. She was so pleased to have the same flowers and she pressed them afterwards to keep in Poppy’s memory box.

Just be there when they need you.

A blessing I will forever be grateful for is that I got to see Poppy.  Because of COVID there was very strict restrictions and Poppy was at the morgue at the hospital.  Amy arranged for us to see Poppy and said she would be behind glass.   When we were shown in, she was in a little Moses basket and I could touch and talk to her. I told her I was her Nanny and that I loved her so much and always would. She was the image of Amy as a baby, and I was so thankful to the staff for allowing us to do this.  Amy was so pleased I got to see Poppy.

Our Poppy will be with us forever. Always loved and we will celebrate her. I am a Nanny with three beautiful grandsons and a beautiful granddaughter. 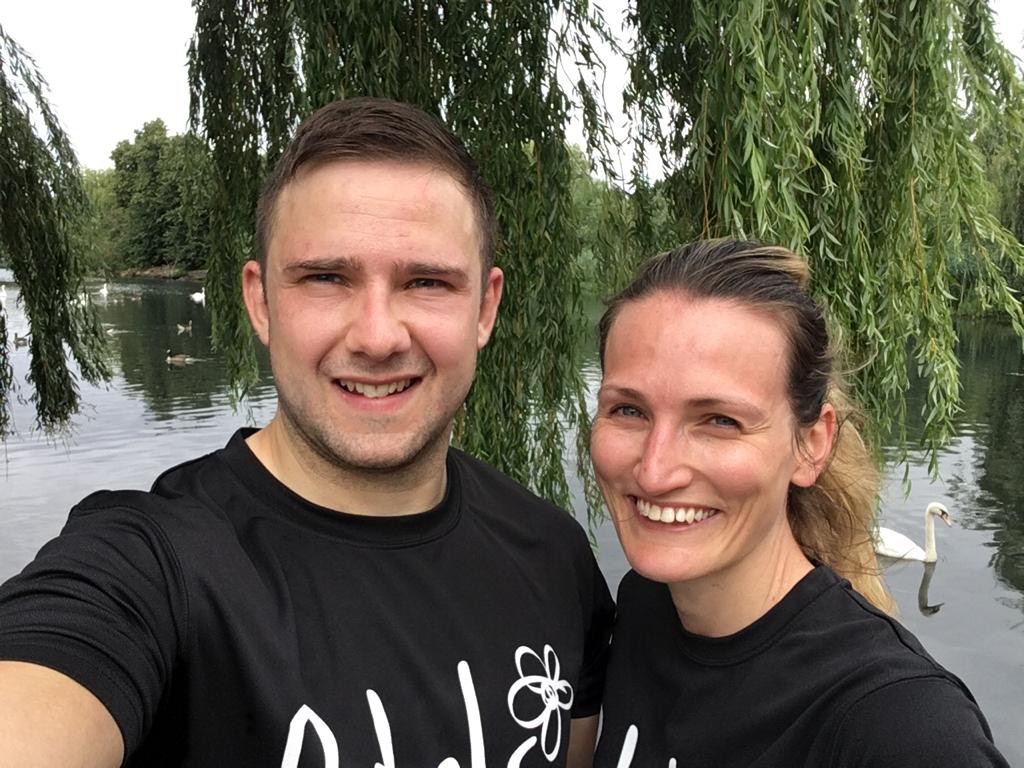 Petals have created a new Facebook Group Called Petals Grandparent you can join the group by clicking the following link: https://www.facebook.com/groups/petalsgrandparents